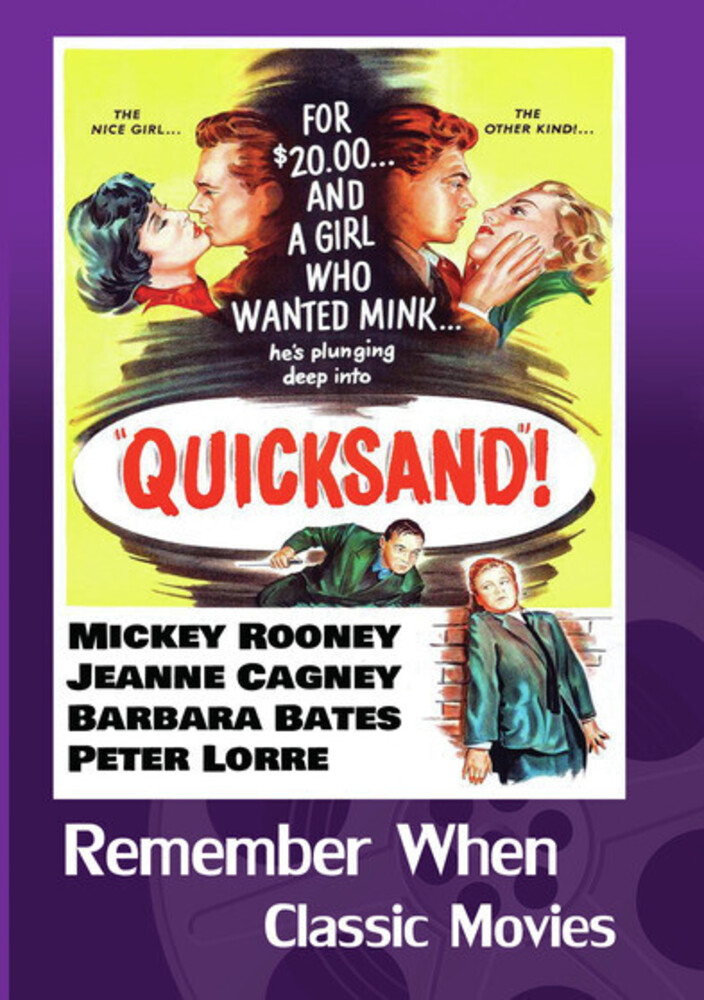 Quicksand is a 1950 American film noir starring Mickey Rooney and Peter Lorre and portrays a garage mechanic's descent into crime. Dan Brady (Mickey Rooney) is a young auto mechanic in California who borrows $20 from the cash register at his job to pay for a date with blonde femme fatale Vera Novak (Jeanne Cagney). Dan intends to pay the money back before it is missed, but the garage's bookkeeper shows up earlier than scheduled and discovers the $20 is missing. As Brady scrambles to cover evidence of his petty theft, he quickly finds himself drawn into an ever-worsening 'quicksand' of crime, with each of his misdeeds more serious than the last. Dan devises a plot to put a one dollar down payment on a wristwatch at a jewellery store, and then takes the watch to a pawn shop where he hocks the watch for $30, using most of that money to cover the original missing funds from his job. Dan is then tracked down by an investigator who tells him that if he does not pay the jewellery store the full $100 for the watch, he will be charged with grand larceny, a crime punishable by three years in prison. After a series of other mishaps, Dan mugs a tipsy bar patron known for carrying large amounts of cash. Dan then meets Nick Dramoshag (Peter Lorre), the seedy owner of a penny arcade on Santa Monica Pier and a man who has had his own intimate history with Vera, Dan's girlfriend. Nick knows about Dan's mugging of the bar patron and blackmails him into stealing a car from Dan's auto garage. Dan's boss soon learns that he has stolen a car from the garage and demands the return of the vehicle or $3,000 in cash or he will go to the police. More stealing and blackmailing ensue until Dan decides he must flee the country for Mexico. This is a fast-paced movie with thrills all the way along and the ending may surprise you. This film provided Mickey Rooney with an opportunity to play a role starkly against his 'nice guy' appearances in the popular Andy Hardy film series.